'The Problem with Christianity' A Book Review 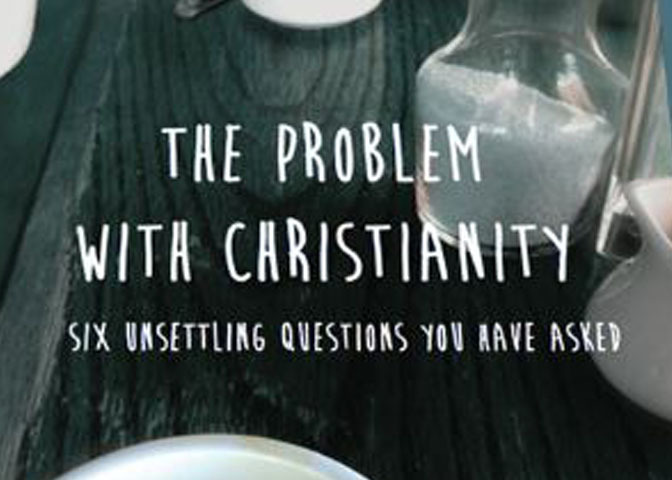 The Problem with Christianity

Christianity can be controversial. The claims of Christ can be uncomfortable, to put it mildly. G.K. Chesterton once wrote something like, “Christianity has not been tried and found wanting. It has been found difficult and left untried.” Following Jesus in any culture, in any time period is difficult for a multitude of reasons. In the western world one of these reasons is that our collective reason, as a culture, resists certain Biblical teachings as foolish, oppressive, unenlightened and downright harmful. This is a problem for Christianity in the western world.

Enter Barton Priebe and his book, The Problem With Christianity, or as it could more accurately be titled, the problems with Christianity. Barton identifies 6 unsettling questions that people within and without the church frequently ask:

Why does God seem to be against Gay people?

Why should I believe in miracles in an age of science?

Why should I worship a God who commanded genocide?

How can there possibly be only one way to God?

If God is good, why is there so much evil in the world?

How can a loving God send people to hell?

These are great objections and Barton is not shy about tackling them head on. Throughout the book, Priebe is to be commended for the clear, unadorned nature in which he presents his ideas. Positions are accurately summarized and objections are fairly stated before the author provides the reader with a sound, thought-provoking response that is theologically robust, ecumenically sensitive, and profoundly faithful to the metanarrative of scripture. This, to me, may be one of the greatest strengths of this book. It is so easy to digest even though the ideas presented are complex and the arguments compelling. Because of this, for someone who is investigating Christianity, or for the layperson who has sat under sound Biblical preaching for decades, serving Christ with gusto, these pages will prove to be an invaluable resource.

I read this book as a preacher and teacher of Scripture. I just recently finished a sermon series dealing with every topic that Barton addresses so I was curious to observe how his approaches differed from my own. Though our thinking is similar on many accounts, what impressed me about this book is the manner each objection is unpacked, first by providing a big picture, foundational response or perspective, and then building on that perspective chapter-by-chapter, layer-by-layer until, as the reader, you are provided with a robust and persuasive response to the initial objection. Barton’s most successful use of this method, in my mind, is in the chapters addressing whether or not God is anti-gay, and the section of the book that tackles the violence of God in scripture.

I firmly believe that a preacher must do his own work in the text and on his knees, preaching the sermon that God has given him for the people. Still, this book equips the teacher of God’s word with a helpful, theoretical framework for addressing these controversial topics in a manner that is culturally accessible and Biblically faithful and, as such, this book deserves a spot on the bookshelf of any teacher or preacher of Scripture.

I don’t have any significant complaints to unceremoniously dump at the feet of the author. The book is theological sound, Gospel saturated, devoid of straw men arguments and filled with helpful analogies to illuminate the ideas presented. Obviously, each question deserves a book (or more!) to fully deal with the nuance and complexity inherent in each issue. This might be most apparent in the chapters dealing with homosexuality, which happens to be a hot-button topic in the church, giving birth to all kinds of practical questions that Barton doesn’t have space to raise or address. This is not a complaint as much as it is a statement about the necessary constraints that a project of this nature imposes on the author. I only mentioned it because I don’t wish any reader to believe the illusion that this book will answer all their questions on these topics, thereby becoming thoroughly disillusioned when it inevitably does not. Rather, receive this book as a great starting point for both the skeptic and the saint who publically or privately wrestle with these perennial and popular criticisms of Christianity.

I will, however, register one complaint though you may decide, as I’m sure you will, how seriously you should take it. In the opinion of this reviewer, some of Barton’s best writing comes at the end of his last chapter dealing with the topic of suffering and evil. Not only does he write a clear, helpful presentation of the moral argument for the existence of God, he writes movingly on the Gospel and the promise of a New Heavens and a New Earth. Allow me to quote him at length:

“All the great stories contain echoes of God’s big story. There is a Prince who, like in Sleeping Beauty, has slain a dragon that holds us captive. There is a place where, like in Peter Pan, we will never grow old. There is a Hero, who like in all the superhero stories will utterly vanquish evil. There is a Prince who, like in Cinderella, has taken us from rags to the riches of being his bride. There is a day coming when, like Frodo in the Lord of the Rings, we will end our journey in the east and the ships will come to carry us home to the undying lands in the West, where white shores call and all turns to silver glass. Christians can enjoy these stories and, when they are done, say to each other, ‘Because of what God has done for us in Jesus, we will get all of this and far more.’ Christians believe that our longing for the world to be put right is more than mere wishful thinking, or, worse, naïve thoughts of children living in a fantasy world. We believe these longings are the ancient echoes of Eden within our souls – that through Jesus, God is working everything together toward a day when his kingdom will restore – even exceed – what was lost in this world so filled with evil.”[1]

Forgive the extended quotation, but even reading these paragraphs again I am deeply moved. The ghost of C.S. Lewis and J.R. Tolkien haunt these beautiful words, though Priebe fairly gives credit to Timothy Keller for inspiring the above paragraphs. For me, the book crescendo’s at this moment and I am left inspired, moved, profoundly impacted by the truth of the Christian worldview and the hope it provides in the midst of hardship. I think it was Blaise Pascal who advised Christian apologists to make people wish an idea were true and then show them that it is, in fact, true. For this reader, the author has achieved that in the above words.

So, what was my complaint? Well, simply stated, the book didn’t end there. Instead there was another few chapters on hell. The writing in these pages was certainly orthodox, profound at places, well-paced and well-written but, for me, anti-climatic. My only suggestion is that when it comes time for a second edition the order of the topics be switched around to allow the book to end on the ringing note of God’s great renewal project that extends to all who trust in Christ in the present and to all of the cosmos in the future.

But, regardless of whether or not this humble suggestion is taken into consideration when it comes time for a second edition, the first edition of The Problem with Christianity, is worth reading. I recommend it wholeheartedly to you.