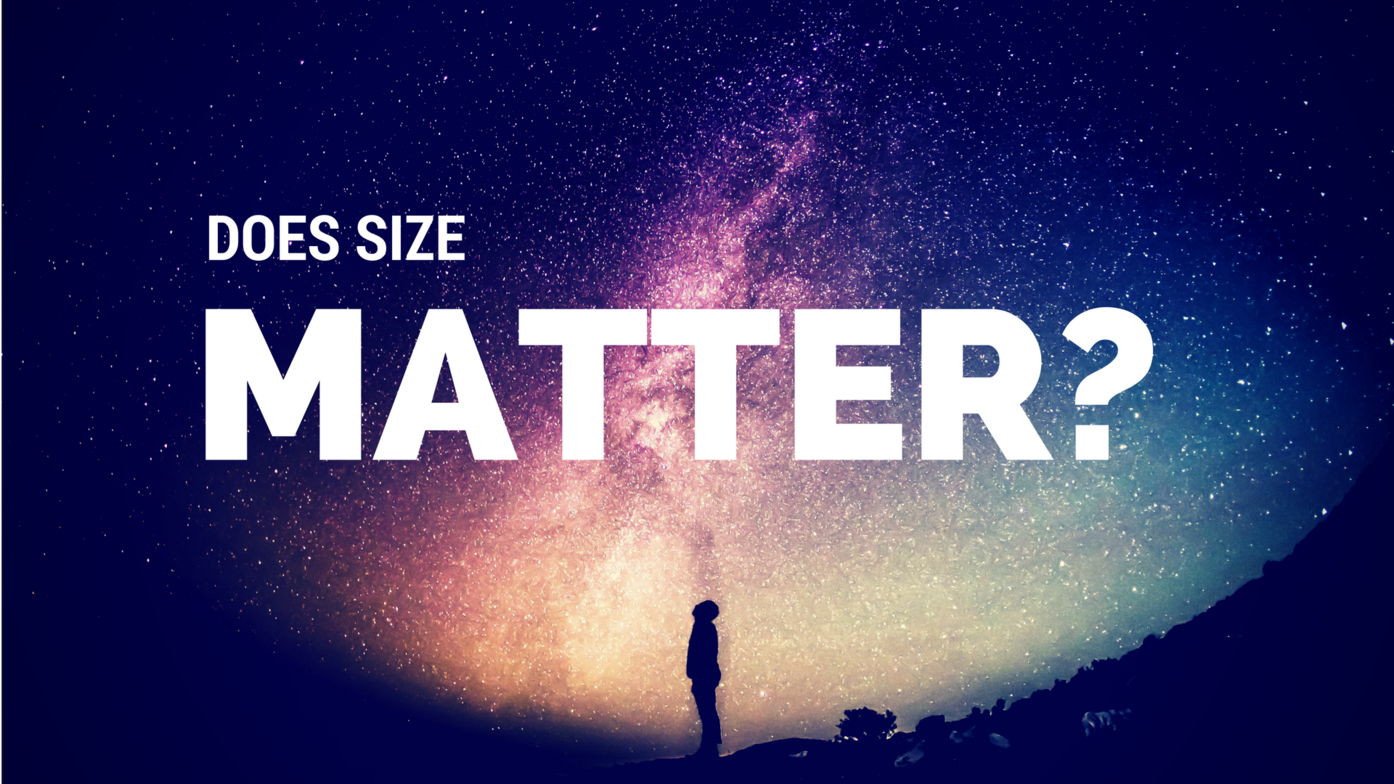 I recently read this thought experiment in a Timothy Keller book:

There are approximately one hundred billion galaxies in the universe and a hundred billion stars in the Milky Way alone. Many stars have planets circling them and plenty of those planets are inhospitable to life. Earth, however, is thriving with sentient beings who believe in a creator who stands behind, interacts within, and sustains moment by moment the physical structure of the created order.

Yet didn’t belief in this God form and flourish at a time when people were ignorant about the mind-numbing size of our cosmic home? Now that we are cognizant of our relative insignificance in the universal landscape, how can we retain belief in a God who cares for us, who knows the number of hairs on our heads; a God who loves us and sent His Son to seek and save us?

This rhetoric has emotional force. So, how should we respond?

C.S. Lewis was tireless in pointing out to fellow moderns that the learned ancients were very much aware of the enormous size of space. Over seventeen hundred years ago, Ptolemy, in what was the authoritative astronomical text of the Middle Ages, taught that “in relation to the distance of the fixed stars the whole earth must be regarded as a point with no magnitude.”1 For the ancient theologian, the staggering size of space was indicative of the majesty and power of God, not an objection to His care and concern for His creatures.

Nevertheless, imagine we shrunk the universe down to a more manageable size, perhaps the square footage of our solar system. Could you conceive of a case against their being a creator constructed along these lines? After all, if God were all-powerful why would He create such a small universe or planet? God has unlimited resources and time to produce something mind-blowingly enormous - why would He settle for a solar system so small, or a universe so devoid of life?

The astronomer Hugh Ross points out that previous to the twentieth century there were other astronomers and philosophers who, despite the work of Ptolemy, did actually contend that the universe was too small to be the work of God. They contended that though the universe required some type of cosmic designer, He must not be very big or strong. “If God were all-powerful and infinite, surely, they reasoned he would have created an infinite universe or at least a much larger universe.”2

At Science World in Vancouver they have an outline painted on the wall depicting the world’s tallest human being. You can stand in front of the outline and see how big you are in comparison. Now, if one were to take the size of the largest star and the smallest subatomic particle and paint them on to a cosmic continuum, the size of human beings would actually be smack in the middle. So all things considered (literally) we are not as small as we think. In addition, for all we know, we are the only embodied, rational beings in the entire universe. As Blaise Pascal noted, human beings can both know the stars and ourselves, which makes us incredibly unique amalgamations of matter; highly significant in the known scheme of things because we can actually know the scheme of things.

That being said, there is still no necessary, logical connection between size and significance and we realize this fact from every day experience. Forgive the trivial example, but I learned this lesson when I first started to drive standard. I remember my first attempt did not go well. My friend and I were rocking back and forth violently, in danger of serious whiplash, as I attempted to disengage the clutch and get the car rolling. Then, all of a sudden, the car lost power. We couldn’t even drive, so we had to coast home in neutral. When we finally arrived we discovered the cause of the problem – a spark plug had been displaced. The spark plug was a very small part of the engine, but very significant to the overall workings of the motor.

The point of this story is very simple and obvious; size does not always equal significance. Again, there is no necessary, logical connection between the two. Therefore, to God and reason alike, size doesn’t necessarily matter when it comes to discovering what matters:

“If it is maintained that anything so small as the earth must, in any event, be too unimportant to merit the love of the Creator, we reply that no Christian ever supposed we did merit it. Christ did not die for men because they were instrinsically worth dying for, but because He is intrinsically love, and therefore loves infinitely. And what, after all, does the size of a world or a creature tell us about its ‘importance’ or value?”5

3. C.S Lewis once wrote that, “This kind of objection to the Christian faith is not really based on the observed nature of the actual universe at all. You can make it without waiting to find out what the universe is like, for it will fit any kind of universe we choose to imagine.” Lewis goes on to compare the above approach to a doctor who determines in advance that his patient has died of poison, while maintaining a theory of poison which he will cling to regardless of what the autopsy reveals.

4. There are, of course, characteristics of the cosmos that I believe make theism far more probable than atheism. This would include the fine-tuning of the universe, the explanatory power of science and the surprisingly elegant mathematical structure of the cosmos, including its remarkable corresponding fit with the cognitive faculties of Homo sapiens. I would also include our reasoning ability that far exceeds our need for survival; making it something highly unlikely that evolution alone could produce. On the other side of the ledger, the atheist would point to evil and suffering, as characteristics of the world that count against believe in God.

Jesus is Rejected in Nazareth Updated Policies and Procedures