20 While I was speaking and praying, confessing my sin and the sin of my people Israel and making my request to the Lord my God for his holy hill— 21 while I was still in prayer, Gabriel, the man I had seen in the earlier vision, came to me in swift flight about the time of the evening sacrifice. 22 He instructed me and said to me, “Daniel, I have now come to give you insight and understanding. 23 As soon as you began to pray, a word went out, which I have come to tell you, for you are highly esteemed. Therefore, consider the word and understand the vision:

24 “Seventy ‘sevens’ are decreed for your people and your holy city to finish transgression, to put an end to sin, to atone for wickedness, to bring in everlasting righteousness, to seal up vision and prophecy and to anoint the Most Holy Place.

25 “Know and understand this: From the time the word goes out to restore and rebuild Jerusalem until the Anointed One, the ruler, comes, there will be seven ‘sevens,’ and sixty-two ‘sevens.’ It will be rebuilt with streets and a trench, but in times of trouble. 26 After the sixty-two ‘sevens,’ the Anointed One will be put to death and will have nothing. The people of the ruler who will come will destroy the city and the sanctuary. The end will come like a flood: War will continue until the end, and desolations have been decreed. 27 He will confirm a covenant with many for one ‘seven. In the middle of the ‘seven’ he will put an end to sacrifice and offering. And at the temple he will set up an abomination that causes desolation, until the end that is decreed is poured out on him." 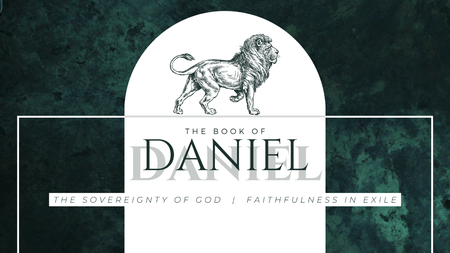 The Book Of Daniel

Take Courage, We're Not In It Alone, Heaven Helps

The Book Of Daniel
Daniel 10

God Wants You To Know He's Got It All Under Control

The Book Of Daniel
Daniel 9

Daniel 8
The Book Of Daniel
Daniel 8

The Powers That You Fear Aren't As Strong As They Appear

The Book Of Daniel
Daniel 7