A King Who Sets His People Free

A New Exodus - A King Who Sets His People Free

*Open your worship time in prayer*

Be Thou My Vision

King of My Heart

Over the past few weeks we have been studying the seven signs recorded in the gospel of John.

These signs or miracles are designed to point us to Jesus as God's Son, the long awaited Messiah who has come to usher in the Kingdom of God.

Each sign gives us a fuller picture of the many faceted beauty, splendor and glory of this second member of the Holy Trinity.

This story needs to be placed in the context of Passover and the miraculous way in which God delivered His people from the tyrannical rule of Pharaoh back in Egypt. Having lead them out of bondage He miraculously provided them with daily Manna (bread) in the wilderness.

The people of Jesus' day were now living under another tyrant, Tiberius - the ruling Caesar of that day. In fact, he had the audacity to rename the Sea of Galilee the Sea of Tiberius - a constant reminder of their servitude.

“After this, Jesus crossed over to the far side of the Sea of Galilee, also known as the Sea of Tiberius. A huge crowd kept following him wherever he went, because they saw his miraculous signs as he healed the sick. Then Jesus climbed a hill and sat down with his disciples around him. It was nearly time for the Jewish Passover celebration.”

After speaking to this huge crowd seated out in the wilderness, overlooking the Sea of Tiberius, Jesus decided to feed them with the lunch of a little boy -  5 small barley loaves (the bread of the poor) and a few "sardine sized" fish.

Miraculously everyone had enough to eat with food left over.

I want you to picture yourself seated on the hillside.

On a regular bases you go to bed on an empty stomach.

The Lake has been renamed after a guy who is taxing you to death.

He lives in a luxurious palace with servants and plenty of food and drink and you struggle just to survive, one day at a time.

And you're being ruled by his foreign army.

One day this Rabbi Jesus comes to town.

His words move you.

His miracles inspire you.

And one day He leads you out into the wilderness and onto a grassy hillside overlooking Lake Tiberius.

You're there all day listing to this man and your stomach begins to grumble, but that might be a normal thing for you because you are poor.

And then Jesus does something incredible. He provides Manna in the wilderness.

And then the penny drops.

Everything begins to add up.

It suddenly dawns on you, with thousands of other people, that the God of the Exodus has returned.

He has finally returned as Moses promised.

“Moses continued, 'The Lord your God will raise up for you a prophet like me from among your fellow Israelites. You must listen to him.'”

"He is here with us.

The God who provided for our forefathers in the wilderness has returned to rescue us from our bondage.

After 1500 years God has returned to break us out of bondage.

To set us free from our slavery to Rome.

To set us free from this evil tyrant.

To deliver us from oppressive taxes and free the poor."

The crowd begins to rise to their feet.

Let's make him king and let's do it now.

“When the people saw him do this miraculous sign, they exclaimed, 'Surely, he is the Prophet we have been expecting!' When Jesus saw that they were ready to force him to be their king, he slipped away into the hills by himself.”

Was he not their King?

Yes, of course He was!

But not the military King they expected.

He had come to set them free but not from political oppression.

He had come to deliver them from a power greater than any military or political power.

The New Testament suggests that mankind's biggest need is to be set free from sin - which is the root cause of all greed, and exploitation and prejudice and violence and oppression and tyranny in our world today.

Sin lies at the root of all personal, and social, and political issues of our time.

Sin lies at the heart of every broken marriage, every wounded friendship, every war torn nation.

We need liberation from our sin which has separated us from God, ourselves and others.

Jesus is the King who leads us into a New Exodus by delivering us from sin's tyrannical rule.

This is a very important biblical truth

Remember Passover was at hand.

On Passover Eve Jesus is seized by the religious leaders; tried in a Kangaroo court and sentenced to death.

He becomes the Passover Lamb who was put to death - crucified on a Roman cross belonging to the emperor Tiberius so God will pass over our sins.

On Tiberius' cross there hung an inscription which read, "The King of the Jews."

And if we had eyes to see, we would see that this was His coronation. This was the moment He was crowned King of Kings and Lord of Lords.

At this moment the fullness of His glory is fully revealed.

At this moment, Jesus the Lamb of God, was crowned King of a New Exodus.

Jesus was crowned King even as He shed His blood upon Tiberius' cross.

The Christian life is not about reformation; it's not about trying harder to be good.

It's about transformation, new birth.

The moment you receive King Jesus as your Saviour and Lord, God sends His Life Giving Spirit to take up residence within your life. And through the transforming power of the Spirit we are set free from the power of sin

Jesus is my King.

I've been set free to be a citizen of a New Kingdom.

And as people of the New Exodus we are to live under the rule of King Jesus and do what He did.

“Our goal is not to go to heaven but to bring heaven into our world.” N T Wright 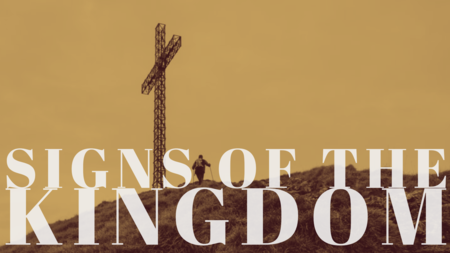 Signs of the Kingdom

How Do You View God?

We Are God's New Creation

Fellowship in the Garden Restored

Raised With Jesus to Newness of Life

Welcome to church online!
Signs of the Kingdom
John 11:1-44

A King Who Sets His People Free
Signs of the Kingdom
John 6:1-15