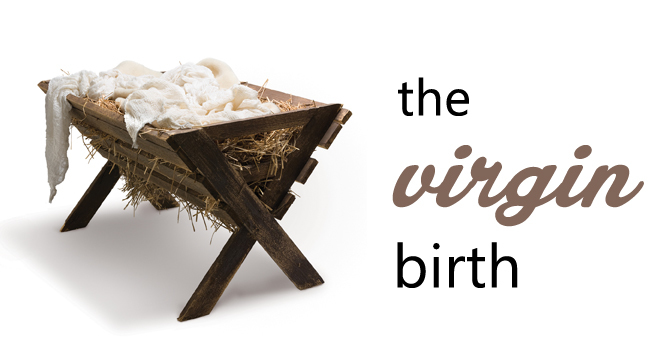 The Christmas story is astounding. As Christians, it is regrettable that we are so inoculated with the Christmas story during Advent that we can become immune to the beauty, power, and unbelievability of it all. This season we celebrate the Creator becoming a creature and the infinite Son of God becoming a finite child. In the words of one of the Narnia children, we wonder that ‘a manger once held something that was bigger than the whole world.’ The Son of God existed from eternity past, ‘true God of true God’, yet He entered time through the womb of a virgin girl named Mary to save sinners.

‘Virgin births don’t happen. I think you should know that.’

This type of sentiment is common in our culture. But to claim a universal negative like this statement requires universal knowledge, which no person possesses, unless of course, you believe in the person of God. If our imaginary objector were more careful, he or she would actually say, ‘Virgin births don’t normally happen, or virgin births can’t happen apart from miraculous intervention.’ To which the Christian should reply, ‘True.’ In fact, Joseph, Mary’s betrothed, knew how babies were born and understood the normal pattern of nature, which is why he intended to divorce Mary when he found out she was pregnant.

What if I don’t believe in God?

‘The Virgin birth goes against everything in our experience.’

You’ve probably heard this objection as well. Even it were true that the virgin birth goes against everything in ‘our’ experience (which wouldn’t be an accurate statement for Joseph and Mary), should we never believe in anything that goes against our experience?

Sometimes I like to imagine that there is no God. I try to think about what I would have to believe about a cosmos devoid of a creator. I would hold firmly to the ‘fact’ that unconscious matter created consciousness and mindless matter created information like that found in DNA, which is analogous to computer binary code.

Allow me, for a brief moment, to make a psychologically revealing statement: a virgin birth is far less impressive, or difficult to believe, than an entire universe out of ‘nothing’ or an infinite number of universes for which there is no empirical evidence; it is far easier for me to embrace a miraculous conception than assume an eternal universe, which would imply an infinite amount of moments proceeding this moment, making it impossible to reach the present moment, as well as overthrowing the everywhere validated 2nd law of thermodynamics.

But these are the beliefs you must hold if you don’t assume the existence of a creator – all of which go against our experience.

The first verse of the Bible claims that, ‘In the beginning God…’ In other words, mind came before matter, ‘logos’ came before natural laws, love proceeded life and intelligence gave birth to information – all of which is confirmed repeatedly by our experience.

Once a person embraces the first verse of the Bible everything else in the Bible becomes possible, including a virgin birth. In the beginning God created everything out of nothing and in the new beginning He did something far less spectacular; He birthed a child in Mary without the direct contribution of a husband. And, for what it is worth, creating a universe without using matter seems far more difficult and miraculous than creating a child without a male.

Celebrating the uniqueness of Jesus

Sep 12
In the Face of Uncertainty Look to Jesus